What do ostrich eggs, hazelnut shells and polar bear skins have to do with architecture. Actually not as little as one might assume, according to Dr. Udo Küppers, a scientist at the University of Bremen. His article looks at the bionics of natural surfaces and highlights some of nature’s “inventions” which could become models for architectural components – or have already been used as such, for example in transparent heat insulation systems.

Packaging bionics is concerned with the matter of technical inventions which can be derived from natural surface structures. This branch of science has already brought considerable progress to civil engineering in the past, for example, the selfcleaning ‘lotus effect’ for paints and rendering, metal and ceramic surfaces. However, the bionics of natural surfaces hides even more surprises for us, as Dr. Udo Küppers explains in his article.

Surfaces are interfaces and as such a universal characteristic of life. One could also say: Natural surfaces are the packaging of life. Even the smallest, thinnest piece of skin just a few millionths of a centimetre thick, a surface consisting of a double layer of fat molecules with its respective structure, provides an extremely effective way of conserving energy within the body. The surface of a layer of bark several decimetres thick of a giant sequoia tree protects its host directly and primarily against manifold weather influences, fires or animals. An unmanageable wealth of highly specialized surfaces spans between the smallest and largest interface of life, which evolution has been slowly improving step by step for millions of years. Inside a host there are special networks of cells (organs), for example, which differ from one another by surfaces which form borders, but still communicate with one another. It is the external covering surfaces against the environment, for example, of the human skin, which fulfil the numerous multifunctional protective functions. It is these external surfaces, in particular, which we perceive primarily as human beings. Across all spheres of life on earth, they serve to fulfil specialized tasks which are important for the survival of the host. Beauty and functionality are closely related in the case of natural surfaces. Evolution has understood how to combine both of these characteristics perfectly.

The exploration of the secrets of natural surfaces is incomplete without a glimpse into the microscopic depths of the layers. It is not until one looks on a micron and nanometre scale that the true success strategies of natural organisms and respective inorganic laminates become apparent.

Bionics is the catalyst between natural surfaces, which can serve as ideal examples of surfaces in engineering and architecture, and the functional, technical and architectural analogous product which is ready for use. It is an independent scientific discipline which can be easily differentiated from other disciplines through its analogy research: Bionics is concerned with the systematic technical implementation and application of the construction, processes and principles of biological systems.

Gaudy scale-like plumage of a pheasant.
Hydrophobic leaf surface of the lady’s slipper.

Products, such as the dirt-repelling facade paints or a special film to reduce surface frictional resistance, are better known to a broad audience of interested persons by the terms ‘lotus effect’ and ‘rib-let effect’. Detailed investigations on natural surfaces of the lotus leaf and the shark’s skin led to these bionic, advanced technical solutions. These are just two of many exceptional results of bionic research and development, which not only make it clear to us just how superior nature’s technology really is, but also show how easy it is to change a decade of old textbook knowledge on technical surfaces. Nature has known that all along: not only the smoothest but also the optimally structured surface is the cleanest.

Packaging bionics – motor for the development of forward-looking technical functional surfaces
Natural packaging solutions satisfy a cross-section of tasks from protection and transport to storage and quality assurance of the ‘packaged life’ more easily than packaging solutions designed by human beings. If you look more closely at the natural surfaces of an organism, you will also soon discover their ‘packaging secrets’.

Packaging bionics has in the meantime established itself as a self-contained growth area of the future within the scientific discipline bionics. It systematically analyses the elaborate variety of shapes, the clever structural combinations and the systemic transpiring energy, material and information processes of natural ‘packaging’ and, hence, natural surfaces as well (Küppers 2006, 2004, 2003, Küppers/Tributsch 2002).

The following examples of ten organism-related surfaces and surfaces covering organisms open up to us only a small window into the fantastic and highly efficient wonderland of natural surfaces:

The ostrich egg – functional surface with protection for developing life
Eggs are one of nature’s many ingenious forms of packaging, in which life can develop protected from external disturbances. This life has to be supplied through the mineral shell with lifegiving oxygen from outside. Expired carbon dioxide has to be able to escape from inside to the outside. Environmental influences, such as strong uv sunlight, have to be reflected from the shell surface. Furthermore, the developing ostrich has to avoid the penetration of microorganisms through the shell structure. Finally, the shell has to be able to withstand mechanical impact, in other words, possess a certain degree of breaking strength. These characteristics make the shell of the ostrich egg a perfectly adapted packaging in the boiling hot habitat of the African deserts.

South African San (bushmen) have been living for thousands of years in close proximity with nature, which they use for their survival purposes without destroying it. The empty ostrich egg integument is therefore an excellent liquid depot for them. Brackish water, a mixture of fresh and salt water, is filled into the eggshells by the hunters, which are closed with clay plugs and given a tribal mark and buried. After returning from weeklong hunting expeditions in the desert, the water is still drinkable.

The reason for this is to be found in the special structure of the eggshell: An inorganic calcium shell structure with a columnar crosssection followed by an inner membrane of tissue (protein network). The shell is rounded off to the outside world with a smooth calcified outer layer. An organic outer skin like a tomato, for example, does not exist for the ostrich egg. As this antibacterial outer skin is missing, the pores of the shell function as a bacterial barrier: They possess openings with a diameter in the sub-micron range, which makes them permeable to air but not to bacteria (size 1–2 microns).

Packaging bionics utilises the properties of the breathing ability and bacterial resistance of this biological packaging. A water-repellent, actively breathing membrane coated with ceramic material was manufactured according to the same principle as the ostrich egg. The bionic packaging films used presently consist generally of normal plastic, such as pet, which are given pores in the sub-micron (pore diameter 500 nm) to micron range using a special radiation process. The film then receives its anti-bacterial and self-cleaning effect by means of a surface treatment with nontoxic nano-particles. These nanoparticles sit tightly both on the surface as well as on the walls of the pores, so that an additional anti-bacterial ‘in-depth effect’ is achieved. In a first comparative test in practice using standard packaging films made of pvc, the membrane showed clear advantages for use with foodstuffs to prevent fungal attack.

Other examples of further uses for this bionically developed and structured surface are to be found in filter technology and civil engineering. The fact that this particular surface structure can be applied both to flexible as well as firm technical surfaces offers a number of starting points for the architect, for example, to prevent mould formation and decay in poorly ventilated rooms. It is imaginable to use wall elements made of thin laminate, which are stiff and provide support and possess the corresponding effects of the bionic films described above.

Shell of an ostrich egg. The small inlet and outlet points for gas exchange can just be recognized with the naked eye on the porcelain-like surface (links).
A San from the Kalahari with ostrich eggs used as water storage containers for hunting.

The hazelnut shell – break-proof covering with integrated supply lines
The hazelnut is distinguished by a velvety smooth outer surface, which is reflected in its particular surface structure. As this is the actual outer wall of the fruit, the outermost layer is the regular epidermis from which short hairs can grow.

The astounding results of measurements from breaking load testing show that the shell can withstand point loads of up to approx. 700 n. This is, hence, in the lower middle of the range between a peanut shell (100 n) and a macadamia shell (3000 n) and far lower than that of a coconut shell (10000 n). By looking through the visible shell surface into the micro- to nanometre range material structures, this provides a first concrete explanation into the secrets of the material’s strength, elongation and other quality characteristics. The macroscopic and microscopic cross-sectional view of the hazelnut shell clearly shows the different cell shapes and the integrated transport channels for the supply of nutrients. These inner transport channels are recognizable with the naked eye as peripheral reinforcing lines. The cell networks have perfectly matched breaking strength and an integrated tubing system, making the hazelnut shell an interesting bionic object for technical engineering and functional assembly parts. The first models for rigid, thin wall elements with integrated supply lines are being prepared.

Polar bear hair conducts the high energy UV-light by total reflection, scatter and luminescence to the black body surface of the bear, where it is converted into heat.

The polar bear’s coat:
light collector and heat donator
Polar bears live in the far North of our earth, the Arctic. The coat of the polar bear is white and hence adapts perfectly to the surroundings. Colour is, however, not only an evolutionary adaptation feature. As researchers were photographing and counting the warm-blooded polar bears with infrared (ir) cameras (infrared sensitive films detect heat particularly well), they experienced a surprise. The developed films did not show a single polar bear, although the researchers had seen them with their own eyes. Ultraviolet (uv) sensitive films (uv light possesses higher energy and shorter wavelength radiation than ir light) showed after development the polar bears as black dots in the white Arctic Sea. The coat of the polar bear, which is covered with small tubular hairs, collects the high energy ultraviolet Arctic light, conducts it with the aid of different physical mechanisms through the tube-shaped hairs to the body surface and converts it there into heat. Little of this heat is lost to the outside. For this reason, it was not possible for the camera people to sight the polar bears to start with by thermal radiation. Experiments, in which the author was also involved, confirm this biological mechanism of efficient protection against heat loss.

Stability testing of foodstuffs. PVC film (17), Bionic film (18).
The section through a hazelnut at high magnification under the scanning electron microscope.

A similar principle for the conversion of light into heat is known in the architectural world as Transparent Thermal Insulation (twd). Building assembly parts which use this principle consist of a thermally absorbing, black absorption layer with a transparent capillary panel (capillaries are small tubes like those of the polar bear hairs) and an external, translucent weather-proof protective layer. Compared to an opaque, in other words non-transparent, insulation layer of the same thickness on the same masonry, Transparent Thermal Insulation can conduct considerably more heat to the inside of the house through the stonework. It is therefore a very effective, energy-saving application from the field of building bionics, which has been used successfully for many years especially in one-family and multiple family dwellings. 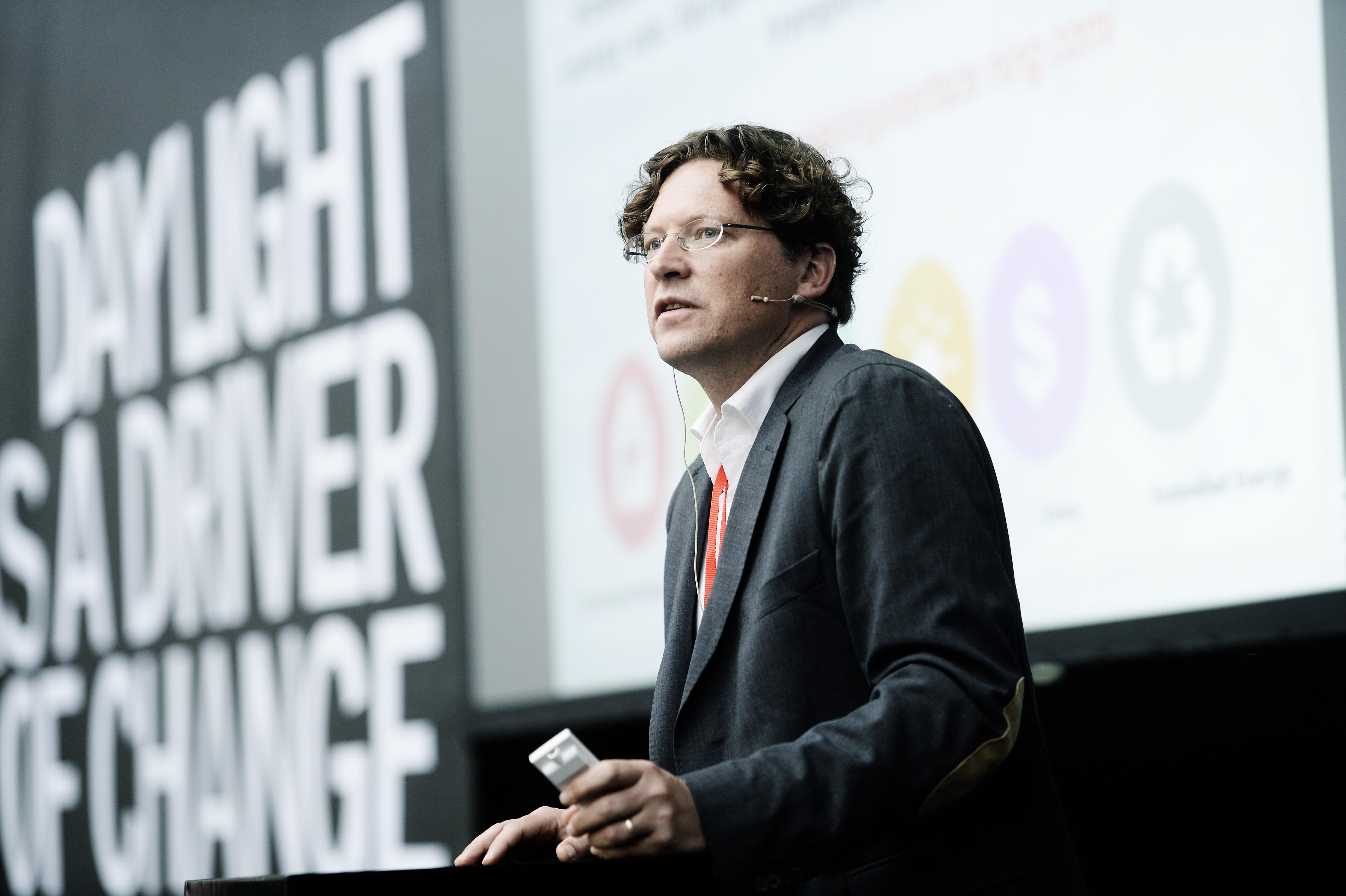 Access to Daylight - Getting People Outside and Daylight Inside 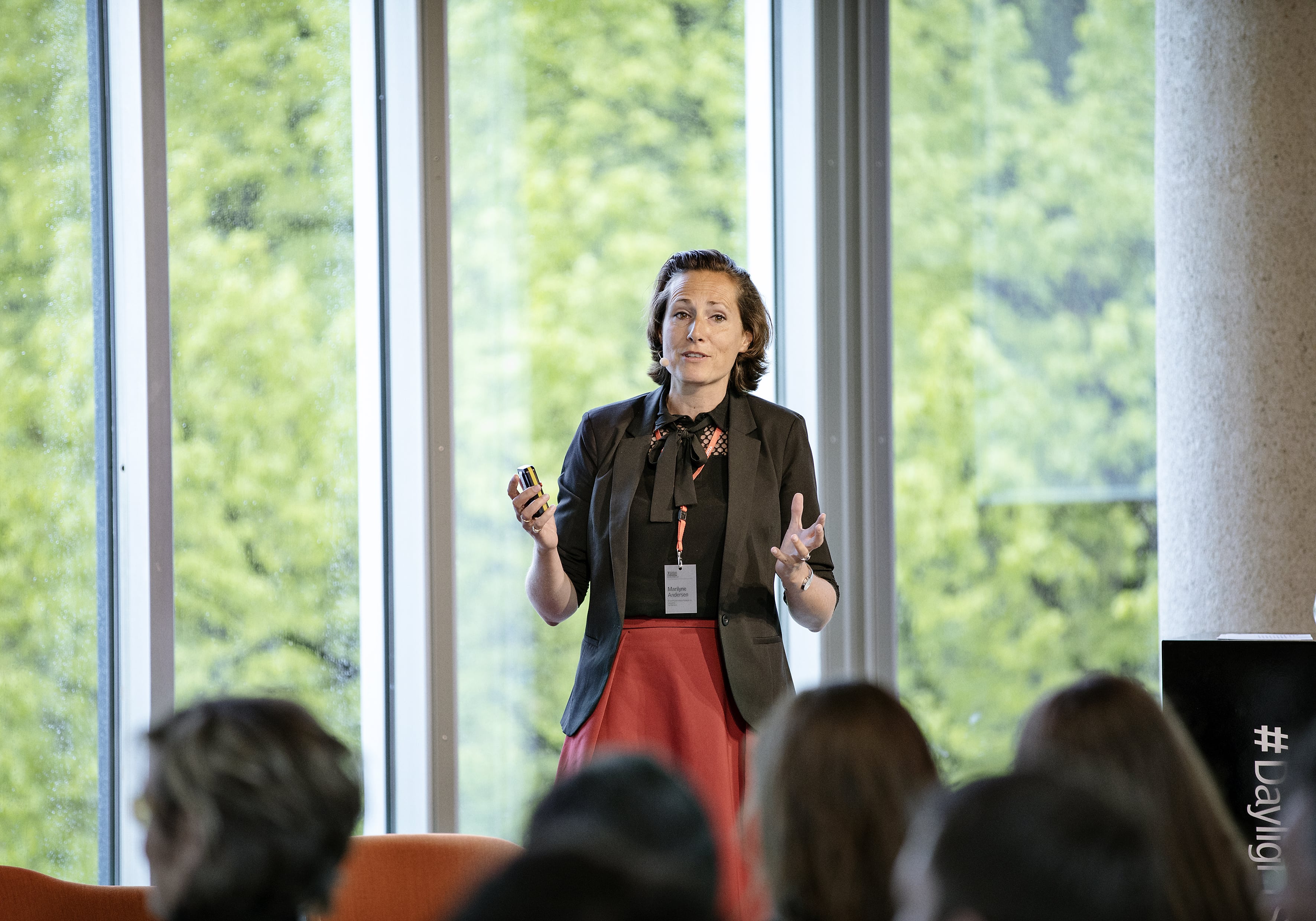 Dynamics of Daylighting Inside Out